“Who’s your favourite Spice Girl?” I ask Mum as we head toward the Manchester Central Convention Centre to attend SPICEUP is the biggest touring exhibition of Spice Girls memorabilia in the world.

The Spice Girls were the biggest thing in the world in the late nineties.
Scary, Sporty, Baby, Posh and Ginger – so much to choose from.
How can someone not have a favourite?

“Then why did you want to come to Manchester and see this exhibition?” 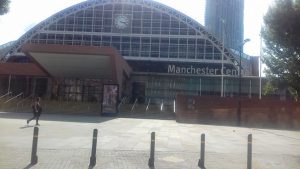 I, on the other hand, was excited. Giddy almost.

Still, that may have been having only just arrived at our nearby hotel at five pm after having taken the wrong slip road on the M60 once the sat nav decided to die, having no lunch plus a heatwave descending on upon us in the car so that we were sweating like a couple of nuns in a cucumber patch.

I prefer to think my wooziness and excitability was down to being due at the Exhibition for five thirty.

“Shall I wear my Spice Girls t-shirt?” I ask Mum as we’re about to leave the hotel. 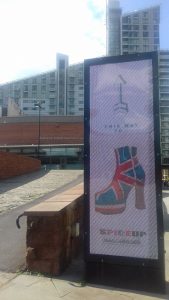 I’d always been a big fan of The Spice Girls from the moment they burst onto the scene in the Summer of 1996. I felt no shame in this – and still don’t. The world had been waiting for an exciting girl group to offer influence and inspiration to young people.

Straight to number one with their debut single Wannabe they were like a whirlwind. Who of us doesn’t instantly recognise the opening intro to that? I bet even now your singing it. Silently, in your head, I hope.

Their nicknames and personas added to them remaining, even now, the band most associated with influencing female empowerment.

“You look like Ginger Spice in that.”
“S**t, I was going for Posh.”
Banter with friends relating or referring to the Spice Girls took place – and still does…

We are greeted by SpiceUp’s curator, Alan Smith-Allison, who has also produced the exhibition. 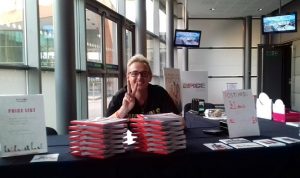 Alan owns huge amounts of the memorabilia on display.

He has, he tells us, been collecting Spice Girls memorabilia since 2007 and has become one of the biggest collectors of it in the world. The SpiceUp exhibition features more than 7,000 items of merchandise and memorabilia, as well as 300 costume pieces, including outfits, shoes and jewellery.

“Dare I ask who your favourite Spice Girl is?” I smile at him.

“I can’t choose. I really can’t. They all had their own uniqueness and talents. They were all empowering and inspiring in their own way.”

I love him – and not just ‘coz he is enthused about the Spice Girls as I am!

We begin our wander round the exhibition. The heels on display are magnificent, five inches and more.

“I had a pair of platform heels, just like that, when I was a teen” Mum said, “I wonder what ever happened to them…”

I imagine Grandad took them to use as tools what with being a handyman.

As they were all sequinned mini skirts and dresses, I must have blanked them out of memory. Or Mum had a second job… 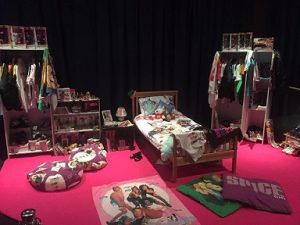 As there is so much to see, we go round the displays twice.

“So, who’s your favourite Spice Girl then?” I ask

Well,” starts Mum, “on reflection, if I had to choose one, I’ll say Geri.”

“She worked with everything she had, pushed herself hard and wasn’t afraid to use her assets. If you’ve got it flaunt it!”

We loved the glamour and glitter of SpiceUp, especially our complimentary Exhibition programmes. 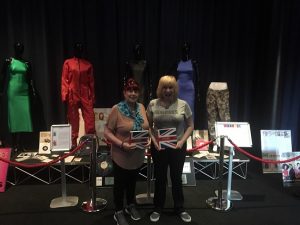 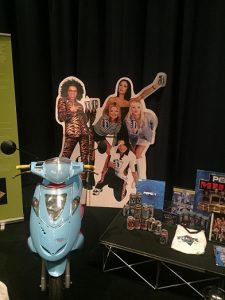 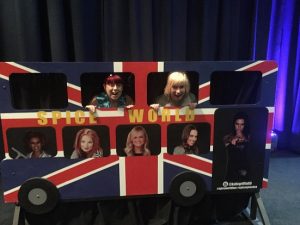 SpiceUp has moved from Manchester Central to the Great Northern Shopping and Entertainment Complex, reopening on Saturday 8th until 30th Sep 2018. https://www.spicegirls-exhibition.com/

In Geordies, Stories, Up North

Not off to a great start as we couldn’t even decide on a name.

We thought of ‘Travels With Meemaw’ only to discover Meemaw derives from the US Deep South and means Grandmother. Not the theme we were after.

‘My Travels With Mamme’ believing this to be a play on words from a cult classic movie, only to realise the movie is called ‘My Dinner With Andre’. So that was a bust.

‘Travels With Mother’ sounds like something from the 1940’s.

‘Eureka!’ We thought ‘We’ve cracked it – Travels With Mama`i!’
Why? I hear you ask. Well Mama`I is Irish Gaelic for Mammy (its pronunciation).
Mum is Irish born, so this is apt.
What if people can’t pronounce Mama`i?
What if there’s confusion?
Then, we’d look full of sh*te.

How about our first name initials incorporated into the title?
M&S Treks – sounds like a shopping trip to Marksy’s…
S&M Adventures – let’s not even go there…

Initials are not going to work then.

We put a call out to our talented, witty friends on social media – so thanks to all of you for the suggestions, you are brilliant! We decided on Races Around The World.

‘But you not travelling the world!’ I hear you think. Nobody said we were going to.
Instead, it is our world. The world we inhabit. The Race world.

There you have it – and we’re off!

“Turn the air con on,” Mum says. “I’m too hot. I can’t get comfortable. How much longer?” We’ve not even started on our journey for five minutes yet.

Taylor Swift’s Greatest Hits CD blasting through the car speakers is starting to grate now. I’d asked Mum not to bring it, but she insisted. Who’d have thought a joke Mother’s Day gift could cause so much joy, for Mum at least.

Our drive is going well, until a strange rattling noise begins to seep over Taylor Swift.

At first, it didn’t bother me. I tried to play it down. If Mum wasn’t going to mention it, neither was I. Why worry the woman who recently asked if I was heading back onto the motorway via a no entry, wrong direction sign…

Then it happened. Mum ejected Taylor Swift to change CDs – she was eyeing up the Wham’s Greatest Hits album – and stopped.

“What’s that rattling?” she asked.

A beat, as the quiet shudder happened again.

“It’ll be nothing,” I reassure.

“Sounds like it’s coming from the wheels. The front wheels. They must be loose. Oh god!”

“Pull over. Pull over and check. I mean now!”

As we were travelling at 70mph in the fast lane, that wasn’t going to happen.

“There’s services in a mile. We’ll stop there,” I say.

That was the longest mile ever. Felt like a hundred. Rattle, rattle. Every few seconds – and no Taylor Swift to drown it out.

I could hear the dashboard clock change minutes. Like Big Ben. Tick tock. Tick tock. All the while, Mum grinding her fingernails deeper and deeper into my upholstery, until we pulled into the services.

“What about the engine?” suggests Mum.

She turns over the engine and does a bit of revving as I stand, , bonnet open, staring into the engine. I have no idea what I am looking for, but the rattling has stopped.
Off we go.

“Hang on,” says Mum. She leans forward and picks up the water bottle than sits in the driver’s cup holder. The rattling stops. It had been the bottle swaying, knocking against the holder. Nothing more.

That’s is why she’s the mother and I am the daughter.