“Oh, you’re bloody joking, aren’t you. You’re the third person that’s told us of a different way to get in!”

We were attending the closing ceremony of the Great Exhibition of the North at Gateshead Quays. No body – security, stewards – seemed to know any of the right information. Usually the case when it’s a large scale public event.

“You’re not allowed in Zone A, in the better, front of stage seats with these tickets. You are in Zone B. Do not move out of it!” barked a steward.

Of the three ways to get to our ‘Zone’, the correct way was up a steep hill, not the best seeing as Mum is asthmatic. The doors were ten minutes late in opening.

“People are like vultures,” I said as people pushed, shoved, rushed to seats. “That woman there has a walking stick and is now making a run for middle of the row seats.”

The setting was an open plan, open air car park, staggered down two sets of stairs.
The stage was already lit, as was Gateshead’s famous Millennium Bridge.
It all looked impressive. 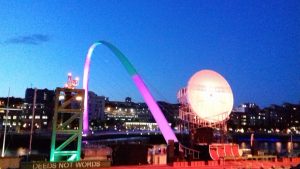 We got seats. On the front row of Zone B. No one else was sitting near them. The end of row seats too. Maybe because they were furthest away from the stage?

“We will.” I say. “Plus we’re sitting next to the exit ramp – we can make our escape any time we like”

It was fri***n cold and quickly getting dark. Mum’s face was tripping her up.
Giving me the evils, blaming me for the situation, as it was my idea to attend the event.
Just the forty minutes to go until the show started then – this should be fun…

Then I spotted someone taking their seat directly behind us.  It was Brenda Blethyn, the wonderful actress in too many fabulous things to mention and currently in ITV’s ‘Vera’.

“Hello,” I said, turning around.

We started chatting and Mum sat stony-faced facing ahead, trying to adjust her coat collar to keep the wind-chill out. Eventually she turned around and upon realising it was Ms Blethyn, broke out into the biggest smile I’d seen all evening. As we continued chatting, Kenny Doughty (Vera’s trusty Sergeant) came and sat down.

“We write a blog,” I began, explaining what it was, “could we get a selfie?”

Ms Blethyn and Kenny were very accommodating and bloody lovely. 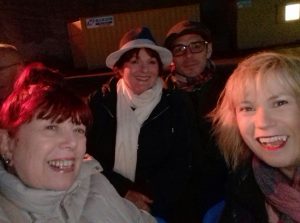 The show, The Great North Star, began just after nine via a teenage girl dancing atop the staircase descending to Zone A and the stage. She was enthused, going for it, fantastic!

A woman audience member started up the stairs to go to the toilet at exactly the same time. The girl was giving it her all, dancing up and down the steps, as the woman continued toward her and had to squeeze past. Talk about timing!

“Bet she wishes she’d crossed her legs,” I whispered to Mum.
“Or wore a Tena lady.” She replied. “Shame for the lass, when she was having her dance solo.”

The theme of the music and dance celebration performance was past and present achievements of great northern women. Female performers of stage and screen explored the empowerment of women. Volunteer performers took on the chorus and crowd roles. It was a wonderful event!

“What was your favourite bit of the closing ceremony?” I asked Mum.

She continued: “No I mean, because it was a real finale. Done in style. Music pumping, everyone dancing. Fireworks. Plus we were clapping which kept me hands warm.”

All in all a great way to celebrate the North!